No doubt, as already widely discussed (in various articles), AmLogic lately due to the excellent compatibility, performance, was among the producers of SoCs for TV boxes/Android mini PC one of the most appreciated by users. In fact, lately we had often to analyze TV boxes based on the Chipset of the famous Asian.

Amlogic S912 that promises to be for the time being the true market reference. In fact, we remind users the success and longevity of Smart (also used for the now famous MiniX Neo X 8-H), the first chipset to offer decode at 4 k, great speed and very high compatibility.

That said, today we want to present a new TV Box based on this new House chipset AmLogic:

A Box from the classical form, like so many others … but with great features and most importantly, as we shall see, with very, very interesting.

as already mentioned, with the new AmLogic S912, introduces a number of new features all linked to Video decoding and image quality. These updates "architecture" (Octa-Core CPU) do make a real leap forward video playback quality and performance.

So at least in the introduction, a good box, among other things based on the new Android OS 6.0 Marshmallow.

But we see in detail all the features of this Box:

The Package seems well looked after and the accessories are the classic ones, we see in detail the contents of the package (Box and accessories):

Last very important note is that relating to the compatibility with KODI (XBMC), which is preinstalled on Krypton 17-beta version and fully compatible with all video formats (including the latest). We believe that, given the experiences with the full compatibility and now AmLogic Kodi Asian home CPUs.

Ultimately one of the best TV boxes (for instance also features slightly higher than those of Beelink GT1). With a classic fit looks aesthetically good, with a good Assembly, and with greater glow (Blue when illuminated-red when in standby). In detail, we have good blocking CPU-GPU-RAM. The qualities of the new CPU AmLogic S912 are undisputed and for us a guarantee, either for playing movies (also in 4 k and H265/HEV-C) and for use in other areas (apps, games etc). Also we should have a very good compatibility with Kodi, guaranteed by the Platform Builder who preinstalls onto your box in version 17.

Internal memory (store) is an impressive 32 GB eMMC (30 GB free to ignition). The Networking industry is of a high standard with RJ45 Gigabit Ethernet and Dual Band 802.11 WiFi ac. Also the external antenna, that maybe you might not like aesthetically, ensures better performance in signal reception.

Perhaps the only "in" (where in you can talk) to this box are: the lack of a USB 3.0 and remote control a bit cumbersome.

As already mentioned in other articles we can, through a partnership with Gearbest, offer for users of XBMC-Italy information about promotions and discounts currently anticipated. 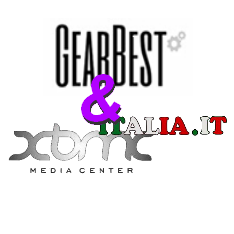 In particular, this box is a Discount Coupon that allows you to get a further discount (upon a starting price already. 62.73 Euro) and with the Coupon: YOKAKB2; This price is further reduced to 56.65 euros.

So if you are looking for your new Tv Box Android, here is a link to the product:

We conclude the article by saying that, as always, to be able to give a definitive judgement we should carry out a full review, assessing the stability and the real performance of box, even under stress.

Hoping to introduce soon a full review, we salute you and we hope you enjoy.

This website uses cookies to improve your experience while you navigate through the website. Out of these cookies, the cookies that are categorized as necessary are stored on your browser as they are essential for the working of basic functionalities of the website. We also use third-party cookies that help us analyze and understand how you use this website. These cookies will be stored in your browser only with your consent. You also have the option to opt-out of these cookies. But opting out of some of these cookies may have an effect on your browsing experience.
Necessary Sempre abilitato
Necessary cookies are absolutely essential for the website to function properly. This category only includes cookies that ensures basic functionalities and security features of the website. These cookies do not store any personal information.
Non-necessary
Any cookies that may not be particularly necessary for the website to function and is used specifically to collect user personal data via analytics, ads, other embedded contents are termed as non-necessary cookies. It is mandatory to procure user consent prior to running these cookies on your website.
ACCETTA E SALVA